Former Mrs. Afghanistan Available for Interviews About How to Help the People of Afghanistan

About How to Help the Crisis in Afghanistan

Masuda Rahmati, the former Mrs. Afghanistan (2005) whom the Taliban attempted to kill for her participation in a beauty pageant, wants to express her current and past knowledge and opinions about how to help the women and children in Afghanistan. She has been an active voice for oppressed women more than 40 years.

During her articulate interview, she will share fascinating information about Afghanistan and stories of her friends that still live there. As an immigrant from Afghanistan and a past refugee, her experiences were harrowing. The contrast between when she grew up with extensive education, women’s rights and freedom in the 1970’s until 1979, the Russians came and was the beginning of the next four decades of terror.

She will also be advocating for your audience to pay attention to the plight of the women, children and seniors in Afghanistan and donate directly to the United Nations High Commissioner for Refugees at https://www.unhcr.org.

Another organization is seeking donations of new household goods for those who are being relocated to California and new mattresses, bedding, linen, towels, toiletries, kitchen items and household items (photos first) and information can be sent to [email protected].  More organizations are listed below.

Over the past three years, Masuda has adopted some families in Afghanistan and has supported them financially and has donated money and books for Afghan orphans as well as supporting poor and sick Afghan people for the past 30 years. She has also given presentations to help young girls and boys improve their self-esteem and overcome the impacts of violence against them. Recently, she also sent money for 800 text books to a school attacked by the Taliban. There are many other actions she can recommend for your audience. She also donates to help cancer patients and sends money to help buy their medicines. Most poor people have no ways of getting medicine. Masuda wants people to know that there are so many wonderful ways to help quietly.

Masuda commends Anjelina Jolie for standing up for Afghan Women’s Rights in Afghanistan and also on Instagram. Masuda was honored to have been invited by Prince Harry among Miss Jolie at the British Embassy in Washington DC in honor of Princess Diana  to celebrate the 25 year anniversary of The Halo Trust, a non-profit non-religious and non-political organizations that clears mine lands in Afghanistan which started in 1988 and now operates around the world.

Masuda Rahmati urges everyone to "use your voice to raise awareness for Justice, for those who are trapped in the darkness of injustice." She adds, “Whether you’re in Afghanistan or America, there are huge racism challenges and minority discrimination that must continuously be addressed. We need to come together as a human family and stand up together to help resolve this global issue.”

-  In 2005, as a Women Rights Activist, Masuda was nearly killed by the Taliban in retaliation for becoming the first Mrs. Afghanistan to compete at Mrs. World Beauty Pageant in Bombay, India. The Taliban came to Carmel, California, where she was living and working as a realtor, to threaten her. Masuda received death threats online and via phone and was nearly killed by the Taliban in retaliation for her participation in the beauty pageant.  Her platform at the time and now is to raise awareness of the executions by the Taliban of Afghan women and girls in Afghanistan for educating their young children in hidden places, going to work, going to school, wearing makeup, exposing their hair, exposing their faces, laughing or listening to music.

- This month, due to the withdrawal of U.S. troops, Afghanistan has fallen back into the hands of the Taliban and women and girls are living the same nightmare all over again. Although not surprised by what has happened, she is devastated to see her government’s quick demise within a matter of days.

-  Masuda explains, “Female journalists, Afghan allies, interpreters and ordinary Afghans are hiding at home in the fear of executions by the Taliban.  Fear has taken over the Country of Afghanistan and the future of Afghan people is beyond bleak and uncertain. The banks are closed, the streets are empty and the merchants have no customers. Only men are seen on the streets of Kabul.  The Kabul airport has become a gateway to life and death. Not everyone is able to escape from the Taliban.  Even though people risk their lives to escape death, unfortunately, some of them get trampled on and killed at the Kabul airport. Children are dehydrated in the scolding summer heat. It was heart wrenching to see a baby get thrown over the metal fence, to the U.S. soldiers for safety. I have never seen this much chaos before my eyes.”

According to Masuda, “The Taliban are vicious and evil monsters and are associated with the other Extremist Muslim Organizations and their goal is to get rid of all other religions.  They are extremely dangerous terrorists and a threat to the entire world.  We must be very mindful so that we do not experience another attack like on 9-11.    We are one World and we should do everything in our power to stand by our beloved Afghan people. This is one of the worst Humanitarian Crises in the World. If we fail to come up with a solution, the results will be consequential and detrimental to the entire World.”

Masuda Rahmati was born in Kabul, Afghanistan on August 10, 1969. She escaped Afghanistan with her family in 1980 due to the Russian Invasion. Her father decided to take his family out of the war-torn Country for a better life and freedom. They drove to Islamabad, Pakistan with a smuggler and lived there for two years and then immigrated to America in 1982.

Her life in America was very different from Afghanistan. She had to learn the language, culture, and adapt to a very different life. After studying very hard, she became a leader and straight-A student within the first year at her junior high school and taught Algebra in her spare time.

In 1995, she graduated with a bachelor's degree in Sociology with an emphasis in Social Psychology from The University of Santa Cruz, California. In the last 20 years, she has been a businesswoman and investor in residential and commercial real estate.

She has been recognized by the United States Congress for her courageous efforts on influencing women about self-love, positive self-image, self-respect, self-independence, power, self-confidence, discipline, education, compassion, mental and emotional wisdom using her own life story.

According to the UNHCR, a half a million people have already been displaced by the violence in Afghanistan so far this year. About 80 percent of nearly a quarter of a million Afghans forced to flee since the end of May are women and children. This latest situation is only adding more suffering to an already tragic situation, in which over 5 million Afghans are displaced in the country and across borders. UNHCR is on the ground to provide lifesaving care and protection to families in need of help.

Here is a recent short video about the situation:

Other organizations that are helping to support: 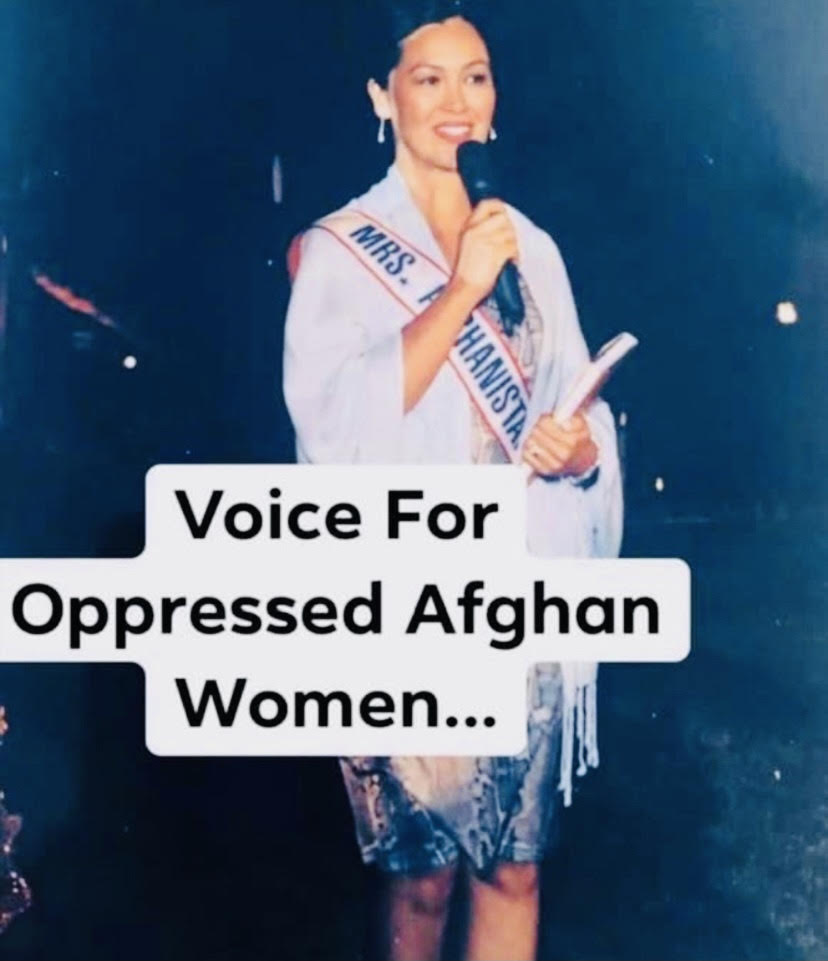 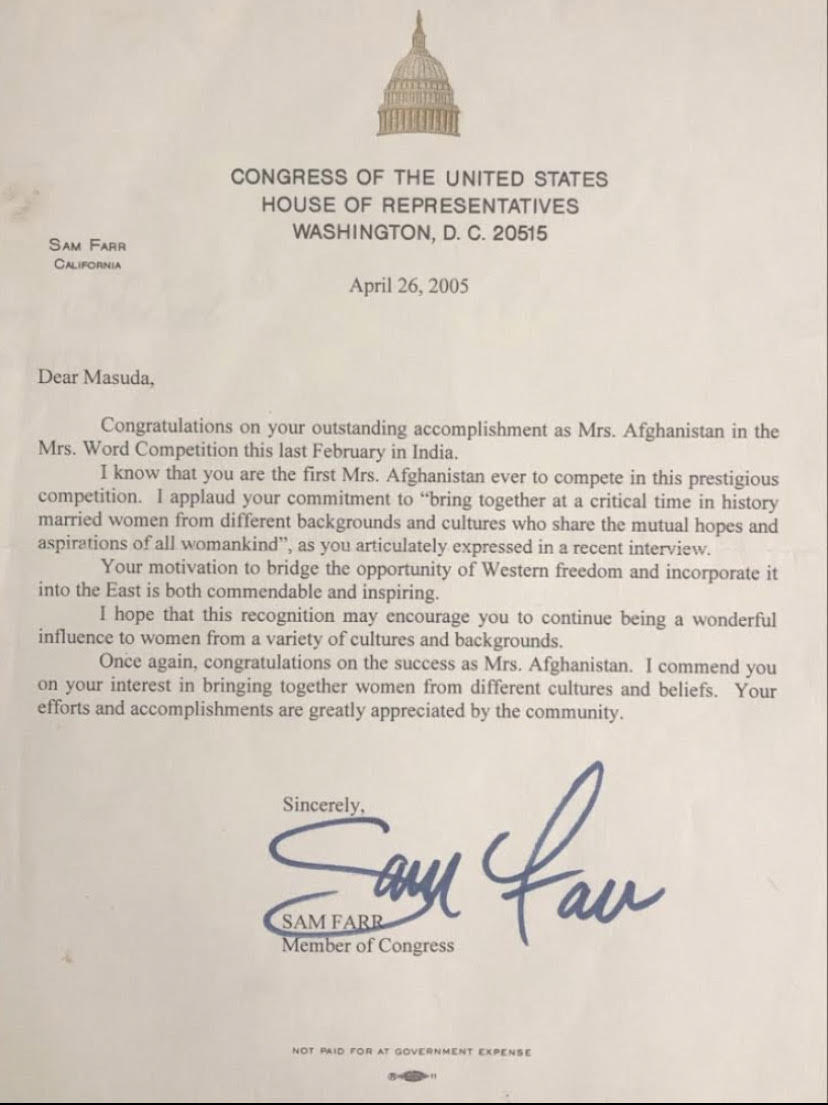